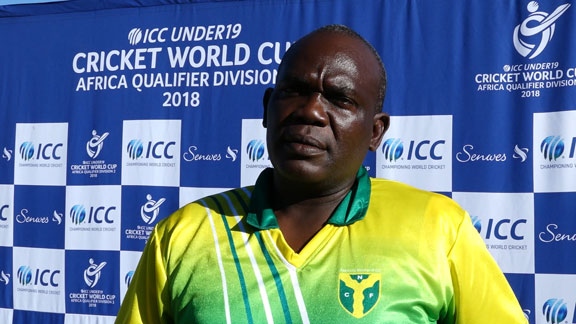 Coach of Nigeria’s history-making U19 Male Cricket Team Uthe Ogbimi has praised the efforts of his wards in securing a historic qualification against all odds to the U19 ICC Cricket World Cup to be held in South Africa in January 2020.

The feat marks the first time in history any Nigerian team will be making an appearance at a Cricket World Cup and Ogbimi who pronounced himself “delighted” with the achievement, told busybuddiesng.com that the Junior Yellow Greens triumph is “a wonderful time for Nigerian Cricket”.

“I feel delighted,” a beaming Ogbimi told busybuddiesng.com following the team’s arrival at the Murtala Mohammed International Airport, Lagos where they were welcomed to much fanfare.

Not many fancied Nigeria’s chances of clinching qualification especially after a 5-match preparatory series against Zimbabwe ahead of the qualifiers ended with the Junior Yellow Greens losing every single game. Ogbimi however said that experience of being “stretched” by a test-playing nation like Zimbabwe was a blessing in disguise as it served to harden the team’s resolve to leave it all out on the field when they got to Namibia.

“We have a team here that is first and foremost very patriotic proud Nigerians, we worked very hard, they prayed so hard.

“We went to Zimbabwe first and we really got stretched by a team that is so far ahead of us and by the time we got to Namibia, the guys looked really determined to go through and by the special grace of God we went without dropping one game. I must tell you it’s a wonderful time for Nigerian Cricket.”

Nigeria’s route to securing World Cup qualification has been long and tortuous but the team has prevailed every step of the way. Securing qualification to the U19 ICC World Cup 2020 is a culmination of a tedious journey that started in August of 2018 in Potchefstroom, South Africa where the team breezed through the Africa Division 2 without losing a game and piped archrivals Ghana to gain promotion to the Division 1.

Having repeated their unbeaten feat to come unscathed against far more superior teams in Namibia in the African Division 1, Ogbimi believes their accomplishments to have had a healthy dose of celestial involvement.

Notwithstanding the divine intervention in clinching a World Cup berth, Ogbimi says his wards will be looking to make a mark on the world stage and announce Nigeria as a force to be reckoned with in the Cricket World when the tournament gets underway next January.

“To be honest, what the guys did: going through Namibia, Uganda, Kenya, Tanzania and Sierra Leone those countries top countries, nobody gave us a chance. And in the chaps’ difficult moments, they fought back those nervy moments, those mental battles, the boys rallied round and they are a strong praying group they know very well that every help we will get from God we will get.