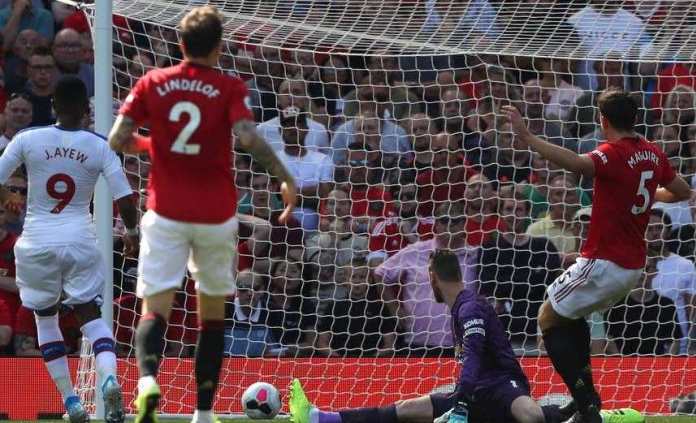 Crystal Palace stunned Manchester United at Old Trafford with an injury-time winner to record their first victory away at the Red Devils since 1989.

Palace full-back Patrick van Aanholt scored a last-gasp winner in the 93rd minute, smashing in from a move that began with Paul Pogba losing the ball in midfield and Wilfried Zaha’s burst forward.

New signing Daniel James thought he had rescued a point for United with his second consecutive goal at Old Trafford when he curled in a delightful equaliser in the 89th minute following neat build-up from Marcus Rashford and Anthony Martial.

But Rashford will rue striking the post from the penalty spot – the second spot-kick the Red Devils have missed this week.

Jordan Ayew had scored the opener in the first half against the run of play, latching on to Jeffrey Schlupp’s flick-on and coolly converting Palace’s first goal of the campaign, before the late drama.

Elsewhere, Moussa Djenepo and Nathan Redmond scored to give Southampton a 2-0 win away at ten-man Brighton and Hove Albion for whom Florin Andone was sent off in the 30th minute.

Sheffield United lost 2-1 at home to Leicester City with Jamie Vardy and Harvey Barnes on target for the Foxes. Oliver Burnie drew the home side level after Vardy’s opener with his second of the season but Barnes struck the winner for the away side who had Super Eagles midfielder Wilfred Ndidi missing in action.

New signing Sebastian Haller scored a brace for West Ham in their 3-1 win away at Watford. Captain Mark Noble had opened the scoring for The Hammers from the spot before striker Andre Gray’s equalised for the home side. Haller’s brace in the 64th and 73rd minute ensured a first win of the season for West Ham.

In the early kickoff, Tammy Abraham registered a brace to hand Frank Lampard a maiden win as Chelsea manager as The Blues ran out 3-2 winners at newly-promoted Norwich City.

Abraham opened the scoring in the 3rd minute but Todd Cantwell restored parity for the hosts three minutes later. Mason Mount restored Chelsea’s lead in 17th minute before Teemu Pukki became only the second man in Premier League history to score five league goals in their first two games when he drew the home side level again with 31 minutes on the clock. Abraham, however, popped up with what proved the winner in the 68th minute.

In the late kickoff, Mo Salah’s second-half brace ensured Liverpool kept their unbeaten start to the season as they spanked Arsenal 3-1 in a dominant display at Anfield.

The victory – a twelfth straight win in the league – also marked a club record of consecutive league wins for the Anfield side.

Liverpool were three goals up after 58 minutes with Salah’s spot-kick in the 49th minute and calm finish nine minutes later, coming after Joel Matip had given the Reds a 41st-minute lead. Second-half substitute Lucas Torreira pulled one back for the Gunners in the 85th minute.