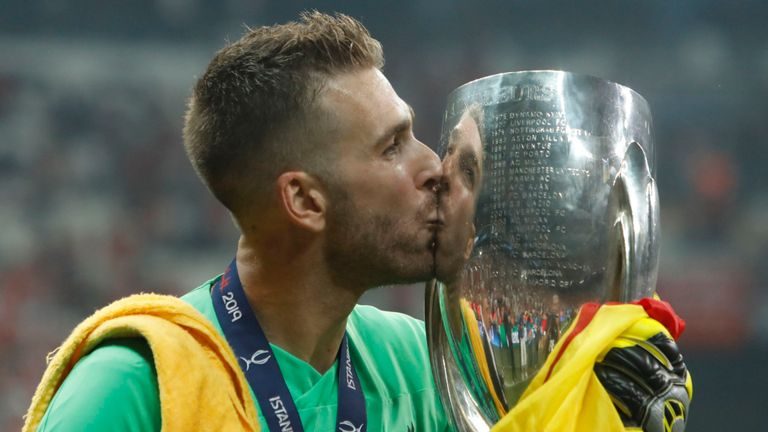 Liverpool’s goalkeeper crisis has taken its most remarkable turn yet as Adrian could miss the trip to Southampton after being injured by a pitch invader, according to Dailymail.

Adrian, the hero of the European Super Cup win over Chelsea, damaged his ankle when a fan ran onto to join Liverpool’s players, who were celebrating after the Spaniard had saved Tammy Abraham’s penalty in the shootout.

As the fan approached the huddle, he slipped and slid into Adrian, having narrowly missed Joe Gomez. Such was the force of the impact, Adrian’s ankle was left swollen and he is now considered a doubt for Saturday’s trip to Southampton.

It is a scarcely believable scenario for Jurgen Klopp, who was clearly angry as he revealed the story at his weekly press conference. He is already without his No 1, Alisson Becker, who faces up to eight weeks out with a torn calf muscle.

Klopp is now faced with the prospect of playing Andrew Lonergan at Southampton. Lonergan, who trained with Liverpool over the summer, signed a short-term deal and is on standby to start between the posts at St Mary’s. Rookie goalkeeper Caoimhim Keheller has only just returned to training after a wrist injury.

Asked how Adrian’s penalty save would help his Liverpool career, Klopp replied: ‘It would help him a lot if it would be 100 percent clear he could play tomorrow. When we were all together a supporter jumped on us, he was chased by some security guys slipped and kicked his ankle.

“It is crazy. Yesterday it was swollen. Today I spoke to him. He is here (at Melwood) – it is better, much better than yesterday. So we have to see. Apart from that it was a brilliant night for him for sure.”

“He will not go for a scan. We will wait for the swelling to go down. He had that and then we had a four-hour flight back so you can imagine that does not help the swelling. He could not have played immediately after we landed in Liverpool,” Klopp added.

Liverpool have written to UEFA to make clear their unhappiness about the incident and are awaiting a response to their representations. This is the third European final in a row in which they have been involved that invaders have encroached the pitch.

There have also been incidents this season – one at Wembley, during the Community Shield, and a streaker in the Premier League opener at Anfield last Friday. Klopp was not amused by what he has seen and did not hide his feelings on the matter.

“There was only Liverpool fans (in Istanbul) pretty much so it probably was one,” said Klopp. ‘What can I say? There is no doubt about how much we love our fans but if they could all stop doing that… that’s the worst example (Adrian) I have heard about.

“It happened against City in the Community Shield when someone was running on the pitch and against Norwich, someone ran on the pitch. It’s not funny. The girl in the Champions League final (in Madrid) made money off it.

“I like that we don’t have fences in stadiums but that means a lot of responsibility for supporters as well. If one supporter cannot hesitate or stop himself, then supporters around him should do it. It’s not funny. It’s crazy. How can something like this happen?”