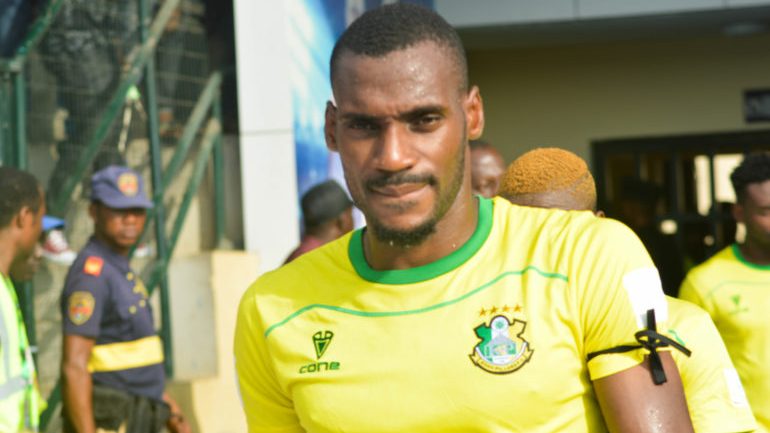 As Kano Pillars get ready to reacquaint themselves with the CAF Champions League following a three-year hiatus, striker Nyima Nwagua says the team has quickly moved on from their recent Aiteo Cup triumph and their “focus and concentration” have now been “diverted” to the champions league where they take on Ghanaian powerhouses Asante Kotoko in the first leg of the preliminary round on Saturday.

The eagerly-anticipated clash with the Porcupine Warriors comes up at the Sani Abacha Stadium and Nyima told busybuddiesng.com that the enormity of the tie was such that the Sai Masu Gida began closed camping in Kaduna immediately after their Aiteo Cup triumph with everybody clear-eyed about “what is at stake”.

“The focus and concentration is on the Kotoko game on Saturday because after we emerged champions of the Aiteo Cup, even right in Kaduna, we were asked to stay behind to have the closed camping ahead of the game. So, the focus after winning the Aiteo Cup has been diverted to CAF Champions League already because we know what is at stake,” the burly forward said.

Incidentally, both sides are returning to the competition after having not participated in Africa’s premier club competition for a similar length of time with both teams last appearance being in 2015 where they both were knocked out in the first round.

And while Saturday’s encounter marks just the sixth sojourn in the champions league for the Sai Masu Gida, Kotoko are seasoned campaigners and have a rich and storied history in the competition having won it twice albeit their last title came in 1983.

Nyima though isn’t daunted by the pedigree of Pillars’ opponents even though he acknowledges the ever-present sporting rivalry between Nigeria and Ghana. And while he admits to not knowing much about Kotoko save for their impressive pedigree on the continent, the 26-year old says the 24-time Ghana Premier League champions hold no fear for him.

“I know they have a very rich history in the CAF champions league, I don’t really know much but I know they are a very good side and we know the history between Ghana and Nigeria also. I would say I respect my opponents but I would also say I don’t fear them,” he declared.

While four-time Nigeria Professional Football League (NPFL) champions Pillars are a formidable side on the domestic scene, their continental record is far from impressive with the club failing to make the group stages in four of their five previous outings in the competition although they reached the semifinal in their very first campaign in 2009 where they lost 5-0 on aggregate to fellow Nigerian side Heartland FC.

Nwagua, however, believes that this present iteration of Pillars are a different proposition who are “at the verge of making history”. He says their triumph in the Aiteo Cup which came after 66-years of trying, shows that they can shed the weight of history and “go far” in the champions league this season.

“So many things have been said against Pillars already,” the Rivers State-born goal poacher told busybuddiesng.com.

“Just as we broke a sixty-six-year-old jinx that was there since, so presently, you can’t write off Pillars because of their past or with their record, because I will always want to say, I think this Pillars is at the verge of making history all round just as we just did in the Aiteo Cup.

“So, I think we are confident that we can go far in this one,” he said.