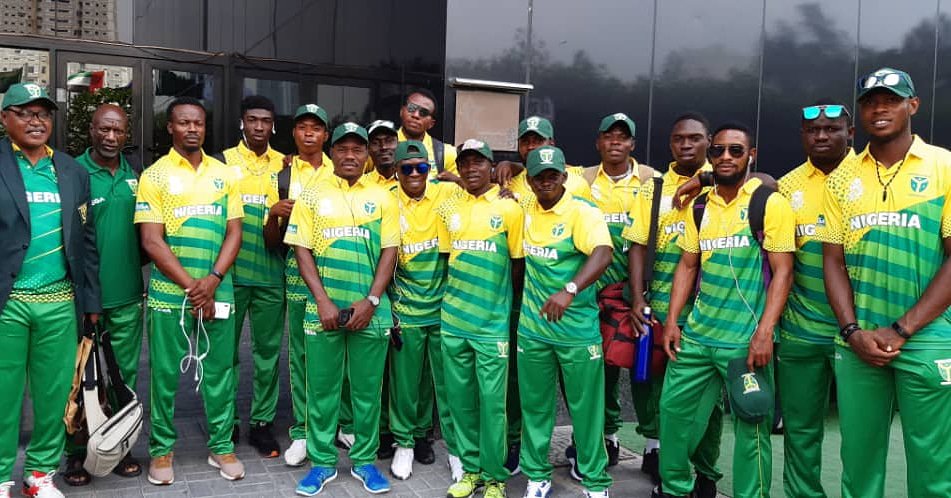 Nigeria men’s national cricket team get their bid for an unlikely qualification to the 2020 ICC Men’s T20 World Cup in Australia underway on Saturday when they play Jersey in the final 14-nation qualification tournament in the United Arab Emirates.

The Yellow Greens who launched a brand new jersey for the qualifiers will be looking to pick up one of six slots on offer for the World Cup and go up against hosts UAE, Ireland, Oman, Canada Jersey and Hong Kong in Group B of the tournament which bowled off on Friday.

And while stranger things have happened (the U19 men’s team qualified for next year’s ICC U19 World Cup against all odds after all), it would be the very definition of a miracle and would cap an incredible year in Nigerian cricket were the Yellow Greens, who are the lowest-ranked team in the competition by some distance, to pick up a World Cup ticket.

They weren’t even supposed to be in the UAE in the first place and owe their presence in the competition to a series of serendipitous events which saw them profit off Zimbabwe’s suspension in June (which has now been lifted) from all ICC events.

With Zimbabwe suspended, the Nigeria cricket team which had finished in third place behind Kenya and Namibia in the African qualifiers were drafted in on short notice to take the vacant spot in the final qualifying tournament.

Before travelling to the UAE, the national cricket team toured Zimbabwe playing seven games against Rhinos Cricket Club in Kwekwe to get them ready for the task ahead.

A final preparatory game – their tenth – resulted in a first-ever win over former World Cup semi-finalists Kenya in the UAE.

That victory over the east Africans has left Nigeria Cricket Federation (NCF) president Professor Yahaya Ukwenya feeling cautiously optimistic of the team’s progress ahead of Nigeria’s opening match on Saturday.

“We beat Kenya for the first time in our history,” Ukwenya told busybuddiesng.com. “You will understand that Kenya, Uganda and Namibia, even Ghana at a point were well ahead of us on the continent including Botswana.”

“And even when we were part of the West African selection, where Nigerian had to play against other West African countries I don’t think we ever beat Kenya. So I think some progress has been made, the boys are in good spirits,” he added.

Notwithstanding his optimism and the positive demeanour of the team, Ukwenya, who is also Africa Cricket Association vice-chairman understands the size of the task ahead and admits that the Yellow Greens will be competing “way out of our league”.

But just like their U19 counterparts confounded expectations of the cricketing world to win the U19 World Cup Africa Qualifiers in Namibia, going unbeaten past seasoned teams such as Uganda, Kenya and Namibia, Ukwenya believes the senior men’s team can also cause another seismic shock after all, “rankings don’t win matches” according to him.

Regardless of the outcome of their sojourn in the UAE, Ukwenya contends that the experience of competing against the world’s elite will have a fundamentally positive impact on Nigeria’s national cricket team and make them a better team.

“But we have already told ourselves that rankings don’t win matches, it’s what you do on the field of play, we are going to give it our best shot and we are hoping that we will get positive outing from it. Either way, we will be a better cricket team.

“We have not much to lose because on paper we are supposed to be really out of reckoning, but at the end of the day, we believe that this campaign will have a major impact on the way we play cricket at senior level,” he added.