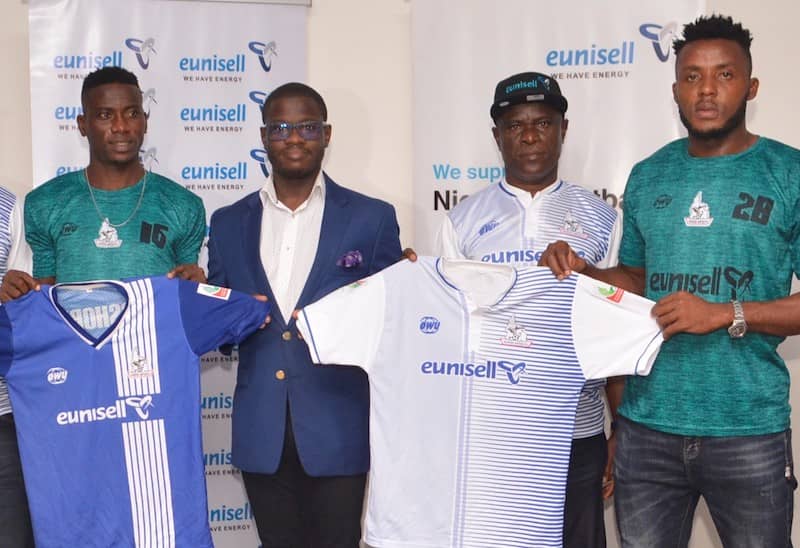 General Manager of Rivers United Okey Kpalukwu has assured the club’s shirt sponsors – Eunisell – of a place on the continent next season in order to repay the loyalty and support it enjoys from the energy, chemical, oil and gas engineering solutions outfit.

Kpalukwu gave this assurance during the unveiling of the 2019/2020 Rivers United kits at the weekend in Port Harcourt.

The Stanley Eguma – tutored side currently lie 7th on the Nigeria Professional Football League (NPFL) table with 9 points from 6 matches, and will qualify to play continental football next season if they finish in the top 3 position or win the Aiteo Cup.

“We still have to do more for Eunisell. We have not been able to win laurels, to make our fans happy,” he admitted. “We have been struggling, but I can assure you that, for this season, we are on top. Forget our position right now, we have a good team and I know that my club has a very strong team that can win the league and can get you a continental ticket.

“So, Eunisell, be rest assured that this time around, we are going to take you back to the continent. We’ll make you proud; we will add value to your company. You can see that even in the streets of Port Harcourt and everywhere in Nigeria, you can attest to it that you see Eunisell everywhere. That was not the case before now.”

On his part, Group Managing Director of Eunisell Chika Ikenga, who was represented by the Chief Finance Manager of the company Dipo Ogunbiyi spoke of the firm’s passion for the beautiful game in Nigeria.

“Eunisell like any Nigerian is very passionate about football. In particular, we are passionate about Nigerian football and our own clubs playing in the Nigeria Professional Football League and, of course, the players who play for these clubs.

“Football in Nigeria provides more than just entertainment value for a large percentage of the population. For many players and aspiring youngsters in school, it is a way of making a living and not just as players on the pitch, but also as supporters to teams that eventually compete successfully in Championships.”

The partnership between Rivers United and Eunisell has been running since 2016, and was renewed for a further season on the 1st of November in Lagos.