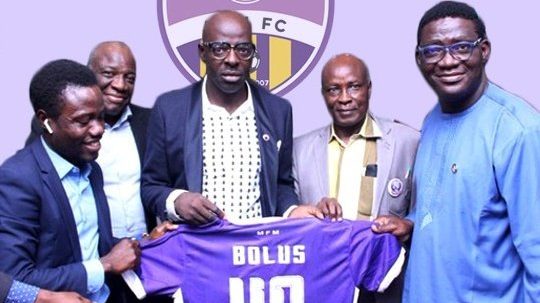 Lagos club Mountain of Fire and Miracles FC (MFM FC) have announced Tony Bolus as the new head coach of the team ahead of the 2019/2020 Nigeria Professional Football League (NPFL) season.

Bolus has signed a three-year contract until 2022 and replaces former MFM FC head coach Fidelis Ilechukwu who ended a 13-year association with the club to sign for fellow NPFL side Heartland FC last month.

Bolus, who hails from Kogi State comes with plenty of pedigree and knowledge of the internal workings and philosophy of the club.

He has previously overseen Giwa FC with whom he was twice named Manager of the Month in the 2015/2016 season. He was also assistant coach to Imama Amapakabo when the current Super Eagles assistant coach led Enugu Rangers to a first league title in over three decades in 2017.

He has a long association with the MFM group and won the annual DK Olukoya National Football Competition with MFM Abuja zone in 2018.