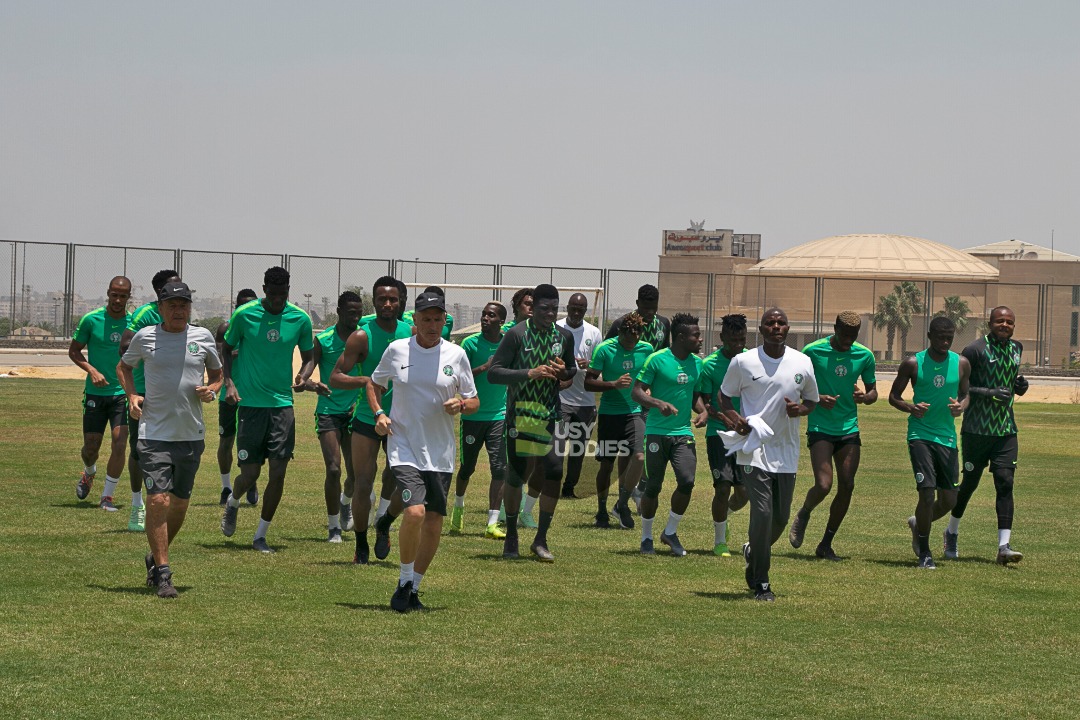 CAIRO – Super Eagles head coach, Gernot Rohr has once again sought to cast his team as underdogs saying Nigeria are “second favourites” ahead of Sunday’s 2019 Africa Cup of Nations semifinal clash with Algeria at the Cairo International Stadium.

Rohr has often used this tactic as a means of deflecting pressure from his team throughout the knockout stages against Cameroon and South Africa and speaking during Saturday’s pre-match press conference, Nigeria’s coach once again downplayed the chances of his team and declared 1990 AFCON champions Algeria as the favourites in tomorrow’s encounter.

Rohr’s declaration of Nigeria as “second favourites” was in response to a question where he was reminded of his remarks prior to the quarterfinal clash against South Africa when he claimed that Bafana Bafana were outright tournament “favourite number one” having defeated pre-tournament favourites and hosts Egypt.

With Nigeria having ousted Rohr’s anointed favourites Bafana Bafana, busybuddiesng.com correspondent Kelechi Nkoro sought to know if that means Nigeria should now be regarded as tournament favourites but Rohr pushed back on that suggestion, highlighting Algeria’s stellar performances in the group stages where they won all three games without conceding as proof that the North Africans have the greater expectation of victory in tomorrow’s encounter.

“And now, we have beaten one of the favourites but yet we have to play against a team which everybody here believes was the best one in the group stage and the results are there to confirm so we are still not favourites. They are still favourites, we are the second favourites,” Rohr declared.

Nigeria’s coach, however, said any one of the four teams still left in the competition are potential winners of the 2019 AFCON because they represent the best teams on the continent.

“I think we have now the four teams who are remaining in the competition are the best teams of the tournament. Everybody is favourite now, we have the same balance. There’s Senegal [who are] number one in Africa, Tunisia number two, we are number three or four I think, so, we are all here.”

And ahead of Sunday’s encounter which will be Nigeria’s first against North African opposition, Rohr called for more consistency from the Video Assistant Referee (VAR) after South Africa’s goal against Nigeria which was originally ruled out for offside was eventually given following an intervention from the VAR.

“Algeria are playing so well so all is open but it is reflecting that we have two countries from Northern Africa and two countries from West Africa who are the best ones actually here, and that’s why I think this AFCON is a tournament which has given good results.

“In every of the game we’ve had, there were no big problems we only discuss about this offside goal because some of the referees I know tell me that there was a clear offside and that the deflected ball was not a pass from Ighalo. The interpretation of the VAR is very difficult and we didn’t speak about the handball in the box for the moment. I hope we will not have this problem tomorrow.”