Group B Preview: Champions Converge As Debutants Prepare For Momentous Occasion At U19 Cricket World Cup 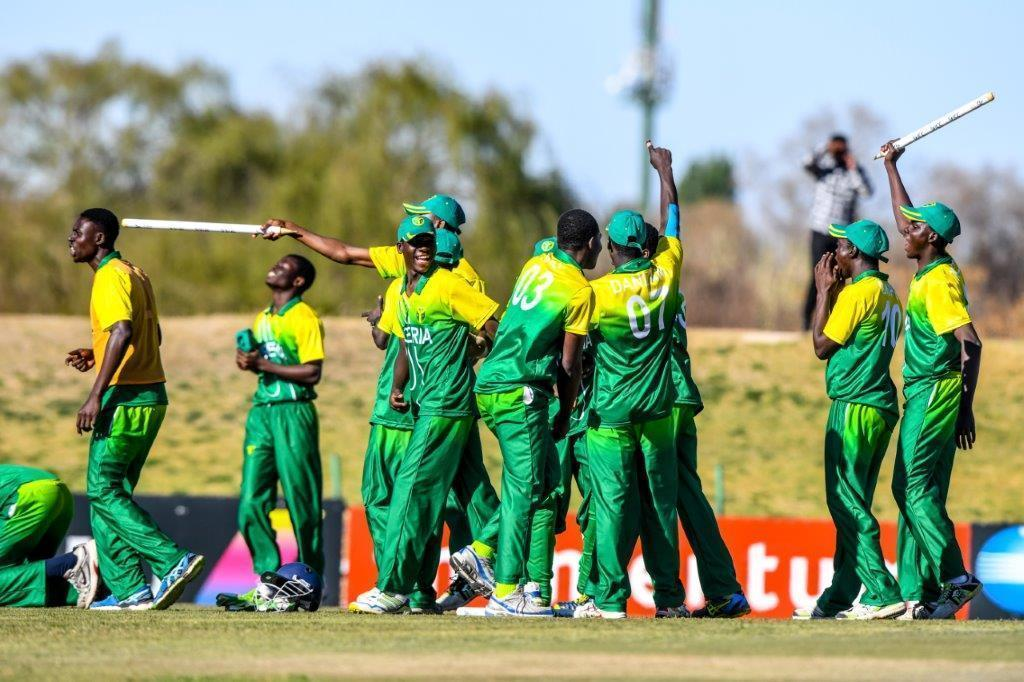 Three former champions and a tournament debutant will come face-to-face as Group B shapes up for drama aplenty in the ICC U19 Cricket World Cup.

Sylvester Okpe did most of the damage his off-spin, returning 4/19.

Australia, England and West Indies have been drawn together for the first stage of South Africa 2020 but at least one of the three cricket powerhouses will miss out on progression.

The three nations – whose senior sides have all won the ICC Men’s Cricket World Cup – certainly have a tough test in store but it doesn’t stop there, with Nigeria aiming for a big scalp on their U19 World Cup debut.

The momentous occasion will see Sylvester Okpe’s Junior Yellow Greens become the 31st team to compete since the tournament’s inaugural edition in 1988 when they face Australia, at Country Club B Field, on 20 January.

All Group B fixtures will take place at Kimberley, with West Indies the next challenge for Nigeria on 23 January before rounding off the opening stage against England at Diamond Oval.

Before that, the opening match at the same venue will see two former champions face off as Australia take on West Indies.

Winners of the Youth Cricket World Cup more than 30 years ago, Australia took the honour of becoming the first double champions when they prevailed at New Zealand 2002.

Eight years later they were winners again – also in New Zealand – while they head to Africa with a score to settle after finishing runners-up back in 2018.

The Australian teens will be coached by Test greats Chris Rogers and Ryan Harris, with three of the squad already boasting contracts in the Big Bash League.

West Indies, meanwhile, name three players that featured in the 2018 U19 World Cup, with captain Kimani Melius, Ashmead Nedd and Nyeem Young all returning for a second tournament.

They’ll do so desperate for improvement, with the talented teens missing out in the opening pool stage before eventually finishing tenth last time out.

With Chris Gayle and Brian Lara among their U19 World Cup alumni, there’s a lot to live up to for the West Indies team – victorious for the first time when beating India in the 2016 final.

“Leading the team, I will go about the job with a high level of integrity and respect,” said Melius.

“I would like to share my experience of 2018 and lead the way with the batting, doing what I can do win matches for the team.

“I never actually liked the game of cricket before playing, but I saw an ODI match on TV between England and Australia, went and had a go and just started working hard from there.”

The group also features the added edge of an Ashes rematch, with Australia and England facing off in a Kimberley contest that could determine who reaches the next stage.

The legends of old have moved on but the expectations have remained, with England failing to reach the final since lifting the trophy two decades ago.

The two Ashes rivals met in the quarter-finals two years ago, with Lloyd Pope the star of the show after taking eight for 35 – the best figures in an U19 World Cup match – to lead Australia to victory.