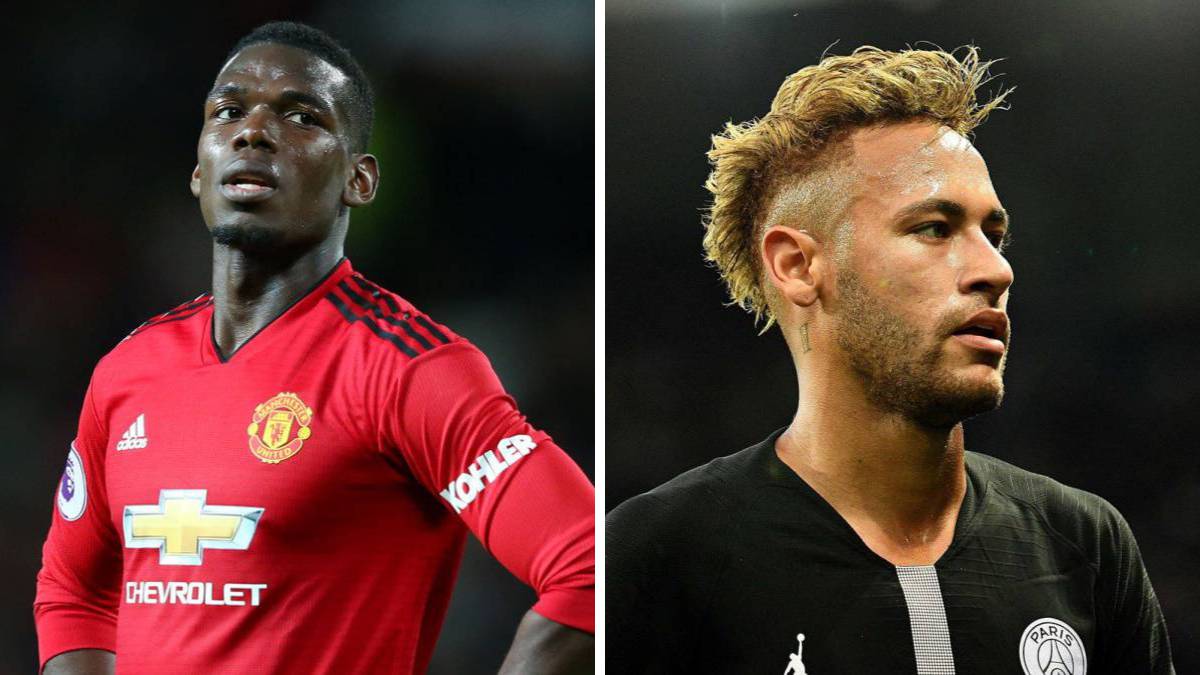 There were 15 deadline day deals in Spain on Monday and when the transfer window finally shut €1.3billion had been spent on new players to La Liga.

But despite the record-breaking outlay (up from last year’s previous record of €888m – or £810m) all the talk on Tuesday is of the two men who did not come.

Not only did Neymar stay at Paris Saint-Germain and Paul Pogba remain at Manchester United but supporters of Barcelona and Real Madrid were left with the sense that their transfers were doomed to fail because neither club ever really had the cash or the conviction to make them happen.

Sources close to the Pogba transfer that never was, suggest that despite Manchester United’s very public rebuttals had they received an offer that comfortably topped the money they spent when they signed Pogba, they would have given it serious consideration. But it never came.

Pogba had made no secret of wanting to sign for Real Madrid. Right up to deadline day he was ‘favouriting’ Madrid-related tweets on social media. And sections of Manchester Untied supporters had made it clear they would not have been against him leaving.

Pundits lined up to say that if he did not want to stay then he was better sold and manager Ole Gunnar Solskjaer is understood to have been privately in favour of a sale as long as it was done early in the summer and brought in huge funds to be reinvested.

But Madrid’s offer never came. An offer of around €160m might have opened a crack in the door but there was no such firm commitment from Real Madrid who had spent €100m on Eden Hazard and appeared not to be able to make another huge investment.

Barcelona spent the summer concocting various ‘proposals’ apparently designed to re-sign Neymar but president Josep Maria Bartomeu briefed from the very start that as he understood it the French club’s owners had no interest in selling at any price.

Barca suggested cash plus player deals that were totally unworkable because they relied firstly on players giving their permission to be used as makeweights and secondly because they relied on Barcelona having ready cash to come good on the monetary side of their proposals – and they never did.

They suggested as many as seven players but Samuel Umtiti, Ivan Rakitic, Ousmane Dembele, Arthur Melo, Jean-Claud Todibo and Nelson Semedo all resisted being sold to raise funds or being sent to PSG.

Only Philippe Coutinho was open to a move and in the end he went out on loan to Bayern Munich, so making the re-signing of Neymar even more difficult.

Supporters of both clubs have been left asking the same question: if the pursuit of Pogba was beyond Madrid and if getting Neymar was never going to happen why were the sagas dragged out for so long?

Pogba was the major summer request from Zinedine Zidane and the club felt obliged to show an interest in the player. As soon as the Premier League window shut it became clear the deal was extremely unlikely and Real Madrid allowed the story to deflate.

Barcelona kept their particular charade going until the last weekend of the transfer window. They made two very open and public trips to Paris to speak to PSG sporting director Leonardo. But in neither of the meetings did the two sides even come close to reaching an agreement.

Relations between the two clubs have never recovered from the manner in which Barcelona ceased to be sponsored by the Qatar Foundation and Qatar Airways and have continued through the buy-out clause swoop for Neymar in 2017.

As tired as Leonardo and Thomas Tuchel and the PSG supporters might have become of the Brazilian, the club’s owners were never moved.

So what was Barcelona’s public pursuit all about if it was bound to fail? Just as Real Madrid felt obliged to make a token effort for Zidane so Barcelona wanted to deliver Lionel Messi’s great pal back to the Nou Camp.

Messi wants to get back to the Champions League dominance the club have not enjoyed since 2015 when Neymar played alongside the Argentine and Luis Suarez. He sees the PSG forward as one of the few players in the world completely on his wavelength.

If the player was available he wanted Barcelona to move heaven and earth to get him back. Barcelona’s problem was that a huge financial commitment had already been made to bring in Antoine Griezmann and Frenkie de Jong.

After putting Neymar on its front page every day for most of the summer Barcelona paper Sport went with ‘Neymar 2020’ on deadline day. Neymar’s convoluted contract does appear to have a release clause that kicks in next year and Barcelona have time to save the €170m it will then take to sign him. If they still want to, that is… a lot can change in 12 months.

For Pogba the dissatisfaction at Manchester United does not appear to be about to go away. The more relevant question might be: how long will Zidane still be at Real Madrid to keep asking for him to be signed?