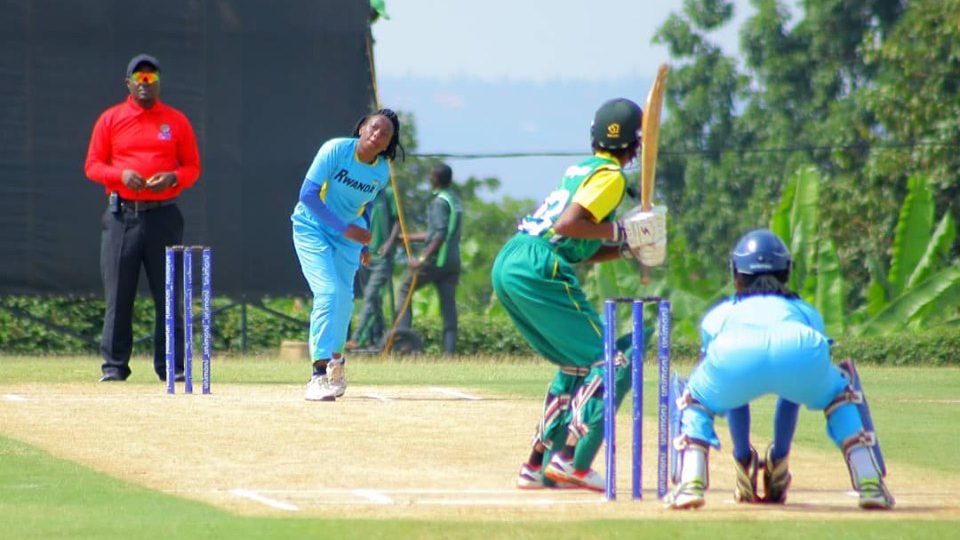 Matchday 1 of the bilateral series return leg against Rwanda at the Gahanga Stadium in Kigali, witnessed a lot of drama, tension, excitement, and spectacular performances.

Match 1, Rwanda won the toss and elected to field first thereby sending in Nigeria to bat. Nigeria could only manage a total of 77 runs for the loss of 8 wickets in 20 overs.

Salome Sunday scored 25 runs off 15 balls as the best performer with the bat for Nigeria.

In the second innings, Rwanda made light work of the run chase with an impressive start. Nigeria found their rhythm in the middle stages of the game but it was a little too late as Rwanda triumphed to a 4 wickets victory with just 2 balls to spare.

Rwanda’s Ikuzwe Alice, who was named Player of the Match, scored 20 runs off 22 balls and Gisele Ishimwe scored 14 runs of 34 balls, with Rwanda winning by 4 wickets

Match 2 produced a thriller that left over 12,000 online followers on the edge of their seats leaving much to ponder on exactly how the atmosphere was at the Gahanga Cricket Ground.

Again Nigeria was put in to bat, but with a better understanding of how the pitch plays, Nigeria raced to an impressive total of 105 runs for the loss of 2 wickets in 20 overs.

Agatha Obulor fell early before Blessing Etim and Kehinde Abdulquadri, a new entrant to the team produced a 100 runs partnership with the former scoring 50 runs not out off 48 balls with a strike rate of 104. 17 and Kehinde with 41 runs off 64 balls.

Rwanda were not going down without a fight and slowly crafted the run chase. Just like the first innings, the game lingered to the last over with 2 runs required from 1 ball to make it 2 wins from 2 games but as fate would have it, Rwanda tied the game scoring 105 runs for the loss of 6 wickets in 20 overs.

Painfully, both teams would be proud of a decent performance as it easily could have been a winner takes all encounter Uwamahoro Cathia score 39 runs off 39 balls strongly supported by Gisele Ishimwe with 25 runs off 35 balls.

Kehinde Abdulquadri of Nigeria was named Player of the Match, with the game tied.

Hosts Rwanda lead the series 1-0 ahead of Match 3 and 4 which will resume on Friday 6th September with Nigeria hoping to earn their first victory.