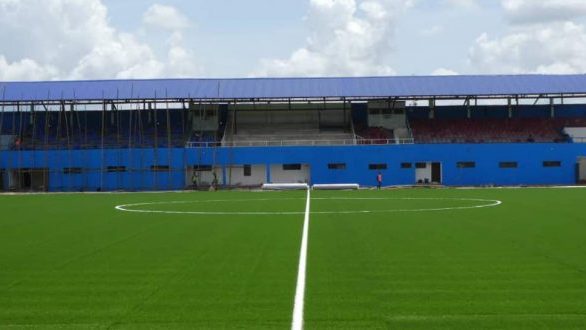 Enyimba will face Burkina Faso champions Rahimo in the second leg of their CAF Champions preliminary round tie in Aba behind closed doors, busybuddiesng.com has gathered.

This was after Africa’s football ruling body, CAF decided that the renovated Enyimba International stadium fell short of its standards,  with the floodlight, environmental and safety conditions around the ground found wanting.

It will be recalled that CAF hurriedly approved the Enyimba stadium last year as the 2-time African champions returned to Aba to face CARA Brazzaville in the CAF Confederation Cup,  a game nearly marred by poor lighting of the floodlight.

busybuddiesng.com further gathered that CAF’s decision, however,  offered the People’s Elephant the option of playing at the Nnamdi Azikiwe Stadium in Enugu or the Godswill Akpabio International Stadium, Uyo on Sunday with the compliment of the spectators, but the 8-time Nigeria Professional Football League kings decided to play without their fans in Aba.

Enyimba, winners of the competition in 2003 and 2004, are seeking to overcome a first-leg 1-0 defeat they suffered in the hands of Rahimo ten days ago in Ouagadougou.

Sunday’s reverse fixture is slated for 4 pm local time, with the fans now prohibited from entering the ground.