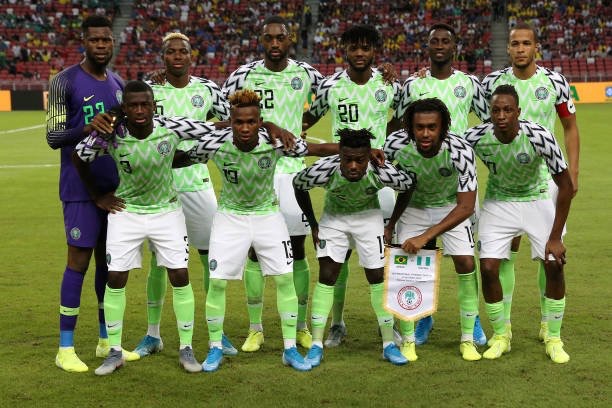 Nigeria and Brazil played out a hugely entertaining draw in a much anticipated friendly at the Singapore National Stadium in Kallang on Sunday.

Glasgow Rangers midfielder Joe Aribo scored for the second game running to give Nigeria a 35th-minute lead before Real Madrid midfielder matters for Brazil with a .

It was a second straight 1-1 draw for the world champions against an African side following a similar scoreline against Senegal three days ago.

The Brazilians started off with great intensity, hugging the ball and making inroads into the Eagles backline seemingly at will but lacked a final ball to make their pressure count.

For all their early dominance, it was Nigeria who went the closest to taking the lead when Victor Osimhen controlled a floated pass from Alex Iwobi to force a save from Ederson in the 5th minute.

An early substitution for the Selecao who lost Neymar to injury in the 17th minute with Philippe Coutinho coming on for the PSG man did nothing to interrupt the flow of the Brazilians.

Indeed, they nearly took the lead in the 28th minute after a mesmerising interplay of passes led to a spectacular save from Francis Uzoho who had to dive at full stretch to keep out Gabriel Jesus’ goalbound header.

Uzoho was called into action two minutes later when a lovely exchange of passes between Jesus, Coutinho and Roberto Firmino ended with the Liverpool forward playing a tame shoot straight at the goalkeeper.

The deluge of missed chances was only going to hurt the Brazilians and so it proved with Nigeria taking the lead in the 35th minute.

Red hot striker Victor Osimhen dragged his marker to the right-hand side as he received a long ball from the midfield. His cross was beautifully controlled by Simon Moses who then laid it off for the onrushing Joe Aribo to score with three simple touches.

With his first touch, he took the ball in his stride, his second touch took out centre back Marquinhos while his third touch beat Ederson in goal for the Brazilians.

It was the second straight goal for the midfielder who reenacted his knack for a perfectly timed run from midfield following a debut goal against Ukraine last month.

Nigeria went into the break on top and started the second half with much better intensity and ball retention than they showed in the first 45.

It wasn’t to last however as Casemiro levelled matters for the South Americans in the 48th minute after Marquinhos’ header had rebounded off the crossbar.

It was all Brazil from then on with Nigeria who lost Uzoho to injury in the 68th minute and saw Maduka Okoye come on for his debut very lucky not to fall behind as Brazil piled on the pressure.

Firmino, Coutinho and substitute Richarlison all went close for the five-time world champions but Nigeria held firm to escape with a draw and extend Brazil’s winless streak to four games.