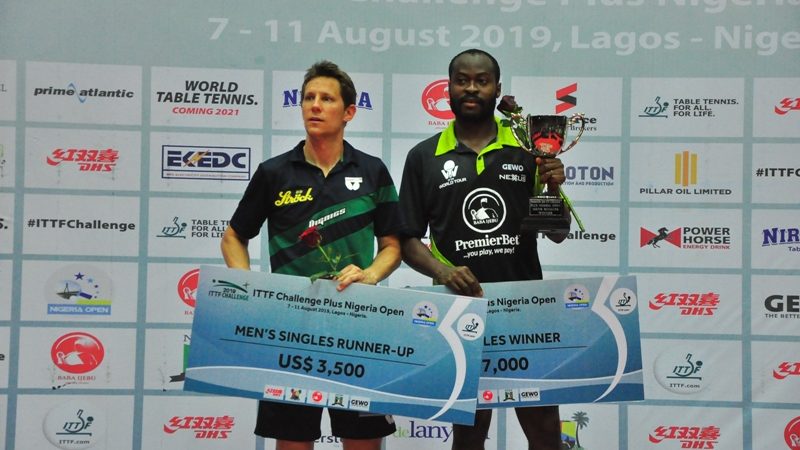 2019 Nigeria Open champion Aruna Quadri says winning the tournament will do his confidence a world of good following his struggles on the ITTF World Tour circuit this year.

“It’s [the win has] been very important to regain my confidence because I’ve been playing not so good [on the] World Tour, of course after winning this one I think I should be able to play much more better with some confidence I have in me now,” an elated Quadri said.

Quadri who became the first player to retain the title after Egypt’s Omar Assar in 2015 said particularly satisfying for him was the fact that he was able to win while carrying an injury which he revealed he’s been struggling with for most of what he says has been a “very difficult season” for him.

“It was a very difficult season for me, of course, I have several titles in Portugal, in Champions League as well as in the European League, but I’ve been playing with an injury,” the player who recently celebrated his 31st birthday said.

His physical problems however returned in the final against Gardos where despite racing to a 2-0 lead, he said he was stymied by pain in his neck which restricted his movements and prevented him from effectively applying his forehand.

He credits the medical team with helping him manage his physical problems and suggested that his opponent’s fatigue also played a part in his victory.

“I was having neck pain before the match, three days ago it was my back. Before the match, I was having another pain in my neck so I couldn’t move my neck very well and I couldn’t play my forehand so I was almost giving up but the medical team came to my aid again and supported me so that was the reason that I was not moving fast.

“And of course, the opponent is a very good player, he played five matches to get to the final so I think he is a little bit tired as well.”

Victory at the Nigeria Open, his third career Challenge Series title, Quadri said, was also consolation for having lost out on the chance of qualifying for the ITTF Men’s Tennis World Cup coming up in China in October when he lost to longtime rival and eventual winner Omar Assar in the semifinal of the 2019 Africa Cup which preceded the Nigeria Open.

The defeat to Assar and with it the lost opportunity of making the World Cup was a big blow but Quadri said rather than get demoralised it strengthened his resolve to win the 2019 Nigeria Open.

“As a champion, you always know that you win some and you lose some so whenever you lose you must always believe your better days are coming and that is one of the reason I was able to retain this title,” he told busybuddiesng.com.

“If I had given up after losing at the Africa Cup and losing out on qualifying for the World Cup I think this wouldn’t have been possible but my never say die attitude, playing like a champion and believing anything is possible I think this actually contributed to my success today.

“I was actually sad [but] nobody wins it all, nobody gets it well done all the time. I won’t be at the World Cup this year, a very bad one for me but of course, I didn’t give up and that was how I was able to come back by winning this title.”

Africa’s top-ranked table tennis player also had good words for the Nigeria Open which was bumped to a Challenge Plus event this year and featured a record number of over 170 athletes from 32 countries.

“I think table tennis is growing in the right direction. Year after year, the Nigeria Open is improving and improving, the level of play is also improving and finally to all the sponsors, they are doing a wonderful job to all the volunteers, media they have all contributed to this great event and I urge everyone to keep supporting the Nigeria Open so that table tennis in Africa and Nigeria can improve,” Quadri said.