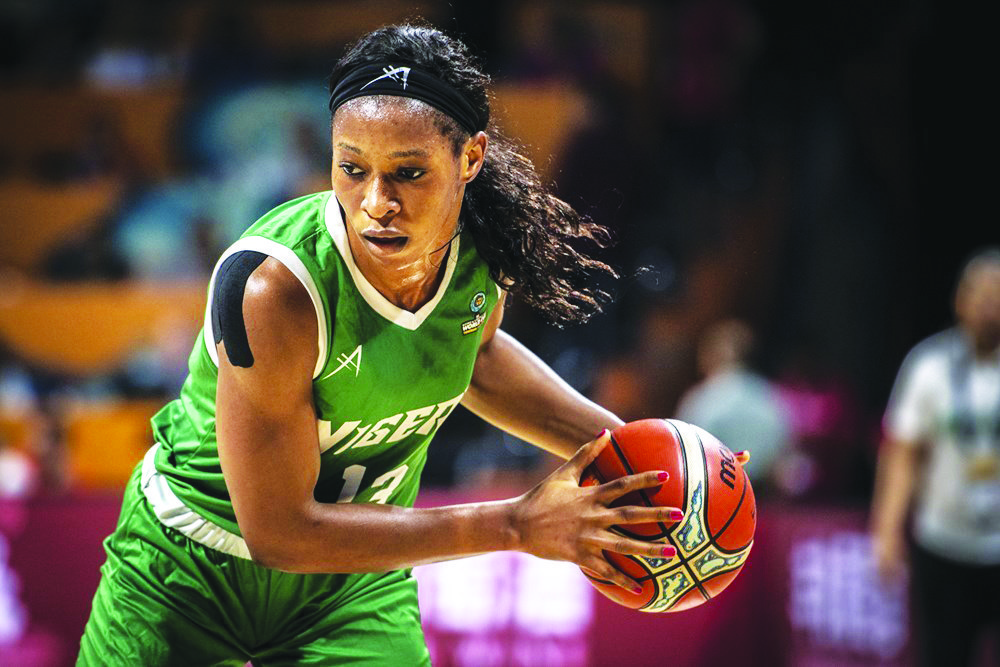 D’Tigress star Evelyn Akhator believes Nigeria’s triumph at the 2019 FIBA Women’s Afrobasket in Senegal was down to their “zeal to win” which she said was much more intense than all the opponents they faced on their way to retaining the trophy.

Nigeria retained their title with a 60-55 points victory over hosts and eleven-time champions Senegal on Sunday in Dakar to complete an impressive unbeaten run that has now stretched to 13 games dating back to the bronze medal match against Angola in the 2015 edition in Yaoundé, Cameroon.

Speaking to busybuddiesng.com after the team touched down at the Murtala Mohammed International airport on Monday night to a heroic reception, the Centre/Forward who was named in the team of the tournament for the second consecutive time after achieving a similar feat in Mali 2017 said the entire both old and young were driven by an intense hunger for glory.

“The thing is just believing in ourselves and we tried to do it as much as we [could],” the 24-year old Perfumarias Avenida of Spain player said.

Facing hosts Senegal in front of a reported 15,000 home crowd – the largest ever recorded for a basketball event on the continent – must have been daunting and it was evident in the way the game swung with the D’Tigress who had led in the first three quarters having to dig deep to claim the win after Senegal drew level in the fourth quarter with a little over two minutes left on the clock.

Akhator said D’Tigress always knew they’d face Senegal at some stage in the tournament and knew they’d also have to deal with a hostile crowd. That mental preparedness she said, helped the team keep their heads during Senegal’s resurgence late in the game and also helped them cope with the febrile atmosphere in the Dakar Arena.

“I think it’s our poise, our zeal and our patience to just keep calm,” Akhator explained about how the girls were able to cope in the face of overwhelming support for the home side.

“[On Sunday] we were playing against 15,000 in the crowd, that’s a lot! But the poise and the calmness to just.., we knew before we left Nigeria that we were going to play against Senegal, not just the players but also the crowd. We knew that for sure and we kept our poise I think that’s what actually helped us.”

At the sound of the final buzzer, the entire team erupted in pure joy but Akhator says the whole thing still seems a bit surreal and it would probably take a few days for the reality of their feat to sink in.

Nigeria’s win also means they have qualified to compete in the Tokyo 2020 Olympics qualifiers November where they will come up against Congo DR and Mozambique in Group A.

Despite their high status as Africa’s best side and having dispatched Congo DR with ease at the 2019 FIBA Women’s AfroBasket, Akhator who had a stint in the Women’s National Basketball Association (WNBA) as the 3rd overall pick in the 2017 WNBA Draft by the Dallas Wings, said D’Tigress will not “take any team lightly” as they plot their way to the Olympics after narrowly missing out on the 2016 edition in Rio.

“We can’t take any team lightly, we’ve got to prepare and come together again and do what we’ve got to do to play.”

Retaining the trophy – Nigeria’s fourth overall – is yet another impressive feat by D’Tigress who last year in Spain, became the first African team to reach the FIBA Women’s World Cup Quarter-Finals.

And for young women inspired by D’Tigress feat looking to take up the sport, Akhator who averaged 11 points and 8.2 rebounds per game in the tournament has a word of advice – keep at it, no matter the circumstances.

“Believe in yourself, keep working no matter how hard it is, just keep working. It might not happen today but in the long run, it definitely will happen.”